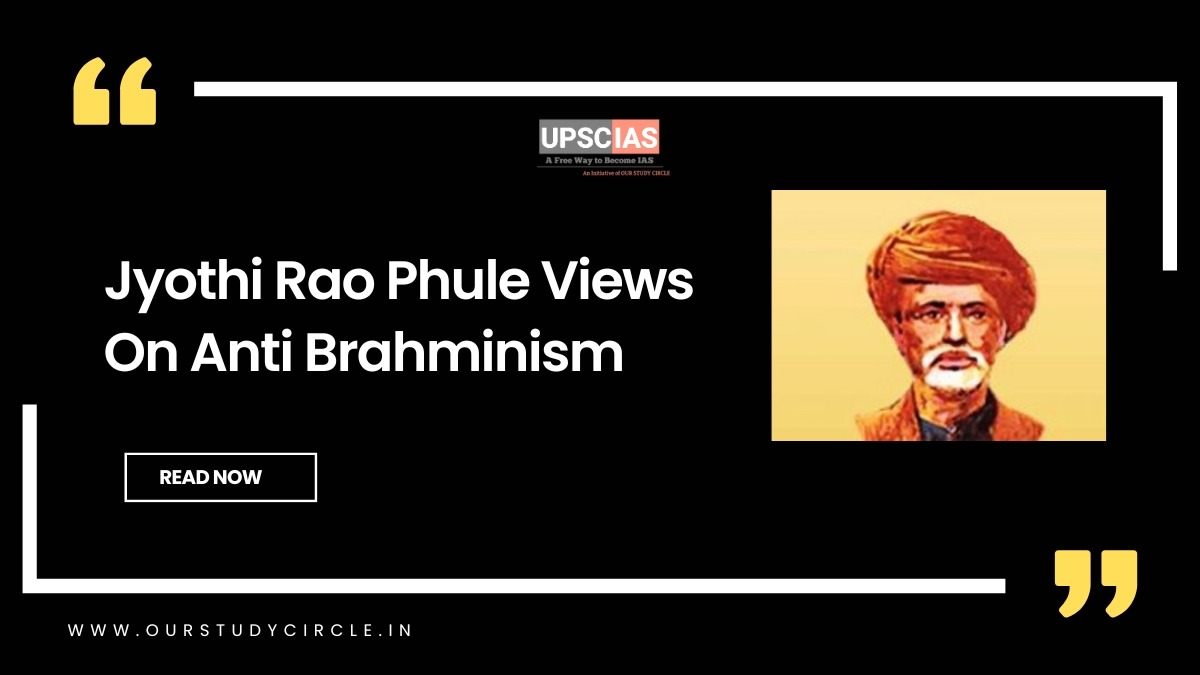 Anti-Brahmanism in Jotirao PhuleThe initial positive reception of the Aryan migration theory by Indian elites and its establishment as a dominant discourse meant at the same time a marginalization of the culture and traditions of all non-Dvijas in favour of the brahmanical-sanskritic “Aryanism”. During the British Raj, however, economically and culturally influential groups had nevertheless established themselves, who did not at all traditionally regard themselves as Dvijas (such as, for example, the Vellalars and Chettis in the south), and from a brahmanical point of view counted as Sudras ; also among representatives of the lowest layers of the population, who in the varna-classification counted as outcastes (avarna) and untouchables, an economically relatively prosperous, if tiny, class had established itself, mainly through employment in army service or as servants of Europeans, such as, for example, among the Paraiyars in the south or the Mahars in west India.

From these circles came a decisive protest against the idea of an Aryan- oriented interpretation of Indian pre-history. Instead a mutation was sought, by means of which the claim to leadership of the Dvija elite was rejected and an emancipatory identity asserted. The first comprehensive reinterpretation of the Aryan migration theory may be traced back to Jyotirao Govind Phule (1827–1890). Phule, who came from a Mali family near Pune in present-day Maharashtra, was one of the important Indian social reformers of the 19th century . He built schools and orphanages, spoke out for equal opportunities in education for women, and fought deteminedly against the social and political discrimination which was being justified by the varna system.

The most important platform for his activities became the Satya Shodhak Samaj, founded in 1873. The same year saw the publication of Phule’s principal work, Gulamgiri (‘Slavery’), which contains the clearest formulation of the interpretive framework within which he understood the Aryan migration theory. The English preface to the book, otherwise originally written in Marathi, begins with the following sentences: “Recent researches have demonstrated beyond a shadow of doubt that the Brahmans were not the aborigines of India. At some remote period of anti- quity, probably more than 3000 years ago, the Aryan progenitors of the present Brahmin Race descended upon the plains of Hindoostan from regions lying beyond the Indus, the Hindoo Koosh, and other adjoining tracts. (Phule 1991:I, p. xxix.)”

In the subsequent comments Phule reveals familiarity with the results of contemporary Orientalist research, which had probably become known to him through his personal connections to Scottish missionaries, and in particular through reading John Wilson’s booklet, India Three Thousand Years Ago . The actual central points of his argument are, however, his own and are entirely oriented to the context of the Marathi-speaking area of western India: ” The Aryan Brahmins established their own supremacy and domination over the original inhabitants here by conquering them in wars. The war-like Kshatriyâs were enslaved and were given the pejorative name of “kshudra” (insignificant) — which later was corrupted into “Shudra”. (Phule 1991 II, 132 [from: ‘Advice to the Shudras and Ati-Shudras’])”

The enemies of the Aryans, described in the Vedas and Puranas as dasyu, were identified by Phule as representatives of the indigenous population. Further- more he subjects a large number of central episodes of the Hindu puranic mythology, in particular the first six avataras of Visnu(Matsya,Kurma,Varaha, Narasimha, Vamana, Parasurama), to a radical rereading and interprets them as evidence of a brahmanical conquest. Two such narratives were particularly often brought up by Phule: the first the story of the Asura king Bali, whom he represents as a wise and just indigenous king, who falls in the struggle against the conqueror (the brahmanical dwarf!) Vamana (e.g., Phule 1991 I, 13–21 [Gulamgiri, Part 6]). The other was Parasurama, described as a wicked brahmanical warrior king, who succeeds in extinguishing the last resistance of the Ks»atriyas (e.g.,Phule1991:I,27–31[Gulamgiri,Part8]).

The ‘system of slavery’ (Phule 1991 I, p.xxxiv [from: Gulamgiri]) established as a consequence of the brahmanical conquest was, according to Phule, characterized not only by a serious physical but also a mental oppression. The Brahmans had denied the Sudras any access to education, and had also forced them into ‘mental slavery’ (ibid. p.li) through the ‘pernicious fiction of the caste-system’ (ibid. p. l):
” The Bhats [=Brahmans] invented an elaborate system of caste-distinction based on the way the other Shudrâs behaved towards them, condemning some to the lowest rung and some to a slightly higher rung. Thus they permanently made them into their proteges and by means of the powerful weapon of the “iniquitous caste system”, drove a permanent wedge among the Shudrâs… The Bhats created dissension among the depressed and the down-trodden masses and are battening on these differences (are leading luxurious lives thereby).